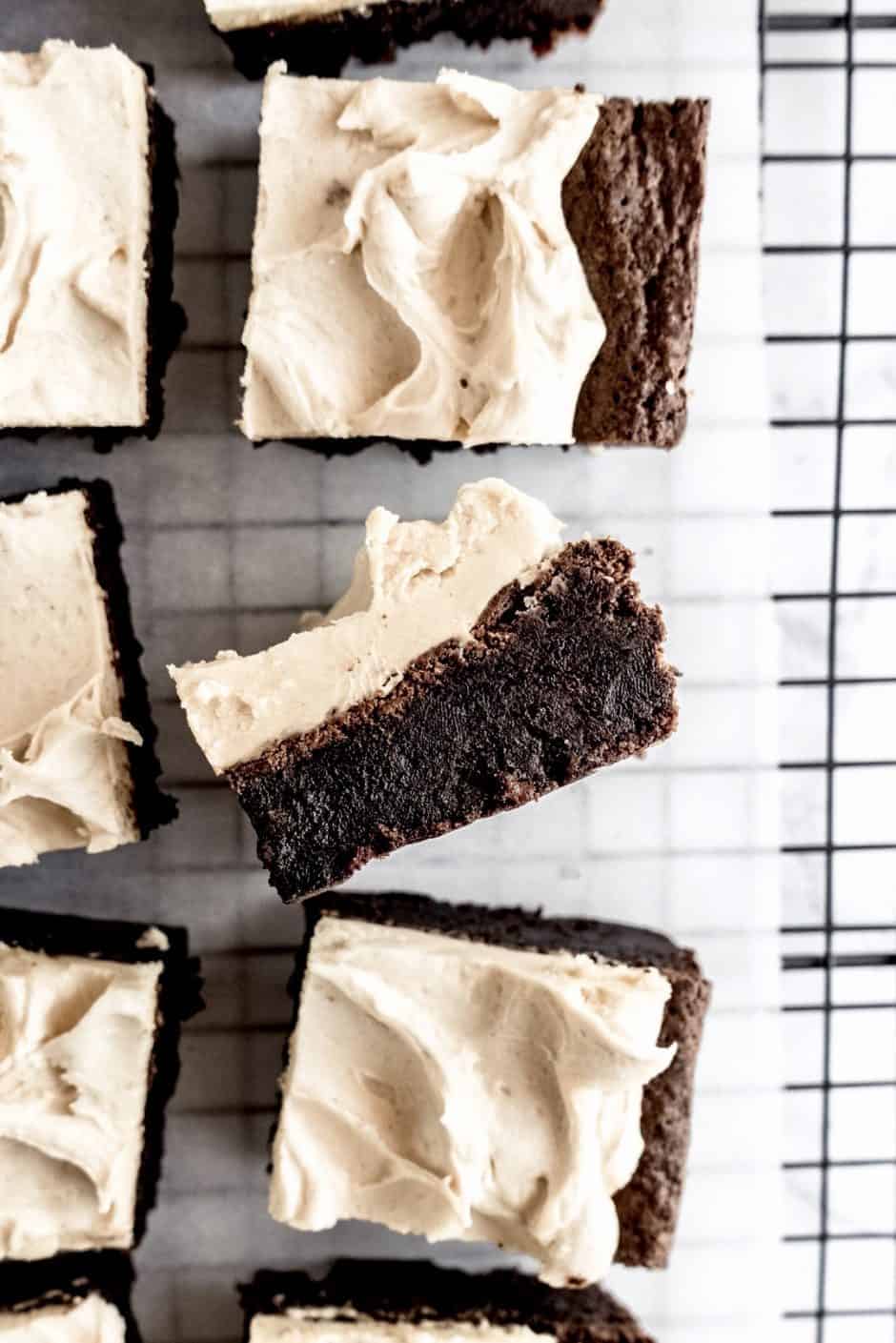 Incredibly decadent and delicious, these whiskey brownies are topped with a peanut butter buttercream that makes these a dessert to die for!

If you looked up the word decadent in the dictionary, a picture of these whiskey brownies would appear right next to it! I love this brownie recipe because it’s incredibly easy to make from scratch, so anytime you have a craving for something boozy and sweet, you can easily whip up a pan of these delicious treats! Everyone needs a brownie sometime, am I right?

I’m proud to partner with Skrewball Peanut Butter Whiskey to make this decadent dessert. When the owner first developed this delicious whiskey by combining two of his favorites —peanut butter and whiskey many snubbed their nose at this idea. But once you have the first taste, you will see why it became their signature shot! I loved this unique flavor combination and knew it would be the perfect addition to a great brownie recipe! You can pick up your own bottle of Skrewball Peanut Butter Whiskey at your local Binny’s, or find another location here!

How do you make whiskey brownies?

What I love most about these fudgy brownies is that they’re made with basic pantry staples. As long as you have a decently stocked baking cabinet, you should be able to make these any time you want without needing to make a special trip to the store! It takes a couple of extra steps to make whiskey brownies it from scratch but it tastes a million times better and once you try it you will never go back to boxed brownies again!

What you need to make these whiskey brownies

Start by melting the butter. If you want to make this a one-bowl recipe, melt the butter in the same bowl you’ll be mixing the rest of the ingredients in. To the melted butter, add your chocolate chips, or chopped chocolate and stir until all the chocolate has melted and the mixture is smooth.

Next, add the molasses, sugar and cocoa and stir until fully combined. Then add the eggs, vanilla, flour, and salt; mix and you’re done! Make sure you don’t over mix these whiskey brownies! Over-mixing the batter will cause the gluten in the flour to develop more, making the brownies tough or hard depending on over-mixed the dough is. Usually, with baking as long as the batter is thoroughly combined, that is all the mixing you really need!

Prepare a 9 x 13″ pan by either lining the baking dish with parchment paper, spray it with cooking spray or a little oil, and then add your batter. When the baking is all done, run a knife around the edge of the brownies immediately when they come out of the oven, let them cool, then lift the parchment paper to take them out. They shouldn’t stick ever again! And your whiskey brownies are ready for frosting and easy slicing.

Melt chocolate and butter in a large bowl over a double boiler.  Stir until all the chocolate has melted and the mixture is smooth.

Add the molasses, sugar and cocoa and stir until fully combined.

Add the eggs, whiskey, vanilla, flour, and salt; mix until just combined.  Do not overmix.

Prepare a 9×13″ glass or ceramic baking dish with cooking spray and pour batter into pan.

Remove from the oven and cool.

Make the buttercream by combining butter, powdered sugar, Skrewball whiskey and peanut butter in a stand mixer and whip on high with a paddle attachment for 5 minutes.

Frost with buttercream, slice and serve.

Hi! I'm Nicole. I am a classically trained pastry chef turned blogger and food stylist, I've been using my culinary skill and artistic sense to create beautiful meals and culinary scenes since 2010. Thanks for stopping by!